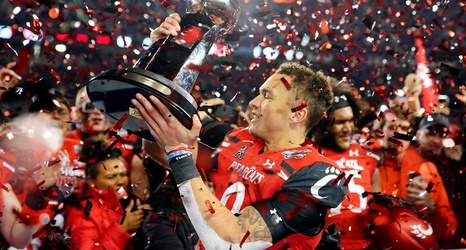 After a seemingly unimpressive season by Alabama standards, the 12-1 Alabama Crimson Tide, led by Heisman winner Bryce Hall, claimed the one seed. After losing to an unranked Texas A&M team, Alabama was able to find its rhythm with a very soft schedule—Alabama only played four teams that ended up being ranked at the end of the season. As the schedule strengthened, Alabama played a series of uncharacteristically close games, winning four games by only one score. However, after steamrolling the number one team in the country, Georgia, in the SEC championship 41-24, it seems like Alabama may be back to its dominant ways. Now Alabama is set to play the wild card four seed, Cincinnati, in the CFB playoffs on December 31.

The 12-1 Michigan Wolverines led by Heisman finalist Aidan Hutchinson secured the two seed. Everyone knew the Wolverines were good, but no one really knew how good until the end of the season. Similar to Alabama, Michigan was involved in many close games at the beginning of the season similar and lost a painful game to in-state rival Michigan State 37-33. However in their last two games, Michigan has been playing like an entirely different team—mostly due to Hutchinson who finished the season with 14 sacks, 58 tackles, and 2 forced fumbles. To make the playoffs, Michigan needed to upset the undefeated Ohio State Buckeyes in one of the biggest rivalry games in all of CFB history, and they needed to beat 17th ranked Iowa in the Big Ten championship game. Michigan ended up comfortably beating Ohio State in a physical match 42-27 and blowing out Iowa 42-3. The Wolverines proved to everyone that they were no joke, and proved to the rest of the playoff teams that they were to be feared. After Michigan’s dominant wins, they are set to play Georgia on December 31st in Miami for an epic battle.

The Georgia Bulldogs, led by their dominant defense, have held onto the three seed in the CFB playoffs. For almost the entire season, the Bulldogs were the most feared team in all of college football. This year’s Georgia football team was considered by many people to feature the best defense in college football history, only letting up around six points per game before the SEC championship and shutting out three different teams. Of course, this was all before being shocked by Alabama in the SEC championship. After that surprising outcome, Georgia will play Michigan on December 31st.

No matter what happens in the CFB playoffs—whether the underdogs come out on top or a rematch between Alabama and Georgia takes place, the playoffs are guaranteed to set up a thrilling national championship game in Indianapolis.