On the last lap of the Daytona 500 in 2001, Dale Earnhardt Sr. died after colliding with the wall close to the finish line. 19 years later, almost to the day, a similar fate was feared.

Similarly to Earnhardt Sr., Ryan Newman was turned coming off of the final lap in the Daytona 500. His car went straight into the wall and then flipped as he crashed into a car going well over 190 mph. Newman was immediately sent to the hospital and was said to be in critical condition, but fortunately, two days later he walked out of the hospital on his own two feet, holding the hands of his two daughters. His survival is astonishing and seems like a miracle, but it isn’t. It is the efforts NASCAR has taken over the past two decades to prevent tragedies that allowed Ryan Newman to go home with his family.

A key factor in Newman’s survival was the HANS device that was required to be worn after the death of Dale Earnhardt Sr. This is a head and neck restraint system that prevents the head from snapping forward. This unfortunately was the case for Earnhardt who died of a skull fracture that was caused by his head hitting his steering wheel upon impact. Luckily for Newman because of this restraint system, his head was stable when his airborne car was hit at full force and when he crashed at 200 mph into the wall.

Newman can also thank Kyle Busch for his surviving after smashing into the wall because Busch is the reason there are SAFER barriers. Busch, a two time NASCAR champion, broke his leg and foot after hitting a concrete wall at Daytona. This led to NASCAR implementing more SAFER barriers (specifically all around Daytona) that absorb energy from collisions.

In mentioning past horrific crashes, one of Newman’s past accidents would actually turn out to be pivotal in saving his life nearly a decade later. Newman was involved in many terrifying accidents at restrictor plate tracks (as many drivers have) that made him an advocate for more safety features. After an airborne wreck at Talladega Superspeedway in 2009,“the Newman bar” was put in place.  This is a support bar that reinforces the window and helps to strengthen the most vulnerable place of the car, the left corner above the driver’s head. This steel bar is attached to a cage that protects the driver if the car flips over or goes airborne. This was exactly the case this past Daytona 500 as Newman’s car flipped and he was hit upside down on the driver’s side (the weakest place in the car).

Further measures taken by NASCAR to help ensure driver safety include improvements in preventing fires by installing a fire extinguishing cylinder and redesigning the driver’s area of the car. The cockpit of the car will see further advancements as NASCAR moves to a new generation car in 2021. Another noteworthy measure has been the opening of the Research and Development Center which studies accidents and has the job of creating more ways to make racing safe. This has clearly been impactful since in the past two decades, there has not been a death in NASCAR’s three series. In the 10 year period ending with Earnhardt’s death in 2001, there were five.

It is without a doubt that it comes down to these safety improvements and efforts that a man who would have been dead a decade ago, let alone two, is alive today. It is for these same reasons that Austin Dillon walked away from a crash that sent his car flying into a fence or that Aric Almirola only suffered a compression fracture when he went airborne after wrecking into two cars on fire. However, the truth of the matter is that no mater how many measures are put in place, the risks are still the same. Racing is much more than driving in a circle. Every time a driver gets into a car and pulls onto the track, his life is on the line. This sport is composed of making decisions in half a second and reacting in the blink of an eye. No other sport is like that. Though with NASCAR’s efforts, the deadly risks are continuing to be reduced and in considering the improvements since 2000, the future is bright. 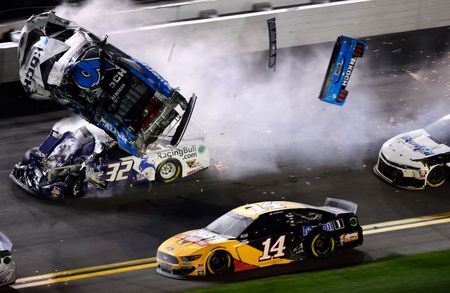