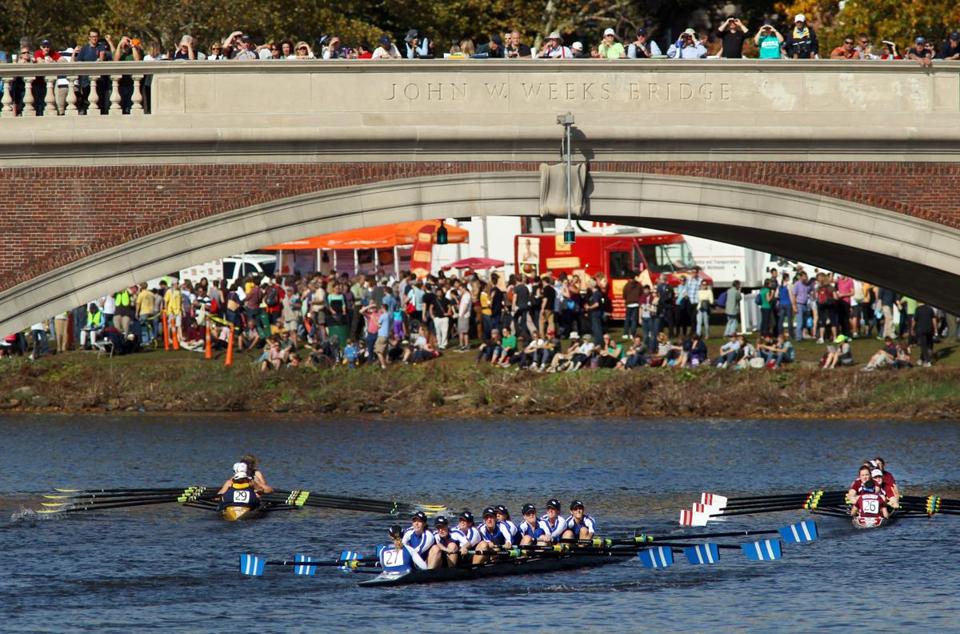 With over 2,300 boats and 800 teams internationally, the 54th Head of the Charles Regatta (HOCR) in Cambridge, Massachusetts this past Saturday and Sunday was the biggest rowing event of the year. Ranging from youth teams to master rowers, the competition was intense. Hundreds of thousands of spectators gathered from across the globe to watch the neck to neck races that took place on the historic river.  Despite the winter-like weather conditions and 20+ mph winds, the energy was still high, and the crowds were ecstatic.

As crews were sent down the race course one by one, observers watched from the shore, but primarily from the various bridges that cross over the river. Rowers described the cheering from the bridges as one of their favorite experiences at this regatta. The range of crews that were invited to this prestigious event demonstrates the diversity of the sport and the growth that rowing has shown over the years. When boats reach the river basin, where they wait before beginning racing, they can see rowers from across the country and the world. The Head of the Charles is truly an international event.

Racing is only one of the many reasons why people are attracted to this regatta. Each year, hundreds of different vendors set up tents along the shore to advertise their products and merchandise. Some of the largest sponsors include Brooks Brothers and Clif. Rowers who have finished racing and passing spectators love checking out the custom HOCR merchandise at Brooks Brothers and receiving free giveaways at the various pop-ups.

The results of this year’s racing are indicative of all the work that crews have put into their craft. This is an especially high stakes regatta, since only the top half of the boats that race in each event is invited to come back the following year. The rest of the boats do not qualify for the next HOCR, but many teams enter the lottery system that the regatta offers. This randomly selects the boats that will be taking the spots of the teams that did not re-qualify, mixing up the competition each year.

Winning the Head of the Charles is considered by many to be the pinnacle of the sport. Only the best of the best medal each year, most of them being national winners and even world champions. Thousands of rowers congregate to race in Cambridge for the chance to write their name in rowing history and represent themselves and their teams. There are less than 365 days until HOCR 55, and crews from all corners of the globe are already preparing to fight for their way onto the podium in the coming year.