The 2021 Off-Year Elections: What Happened in Virginia?

On Tuesday, November 2nd, America held a series of off-year elections at both the state and regional level. The Democratic Party suffered many losses in the recent elections, especially in Virginia—a state that had voted for Biden by 10.8 points in the 2020 election. The GOP managed to flip much of Virginia with Republican victories in the gubernatorial, lieutenant gubernatorial, and attorney general races. To add insult to injury, in the weeks prior to the election, Terry McAuliffe, the Democratic candidate and a former governor of the state, was leading by 6.8 points in the polls. Democrats were hopeful, but ultimately, Glenn Youngkin, McAuliffe’s GOP opponent and a business executive, won the state largely because of opposition to McAuliffe’s controversial stance on education and the economy.

Education has recently become a contentious topic across the country, with issues over the inclusion of critical race theory (“CRT”) and explicit content in schools. Parents have been actively and publicly expressing their concerns, and the debate has become extremely politicized.

McAuliffe is opposed to parents interfering in childrens’ education. In a debate with Youngkin, he said, “I don’t think parents should be telling schools what they should teach.” McAuliffe has reflected these values in his stance on other issues with education. For instance, McAuliffe is opposed to banning explicit material from schools, which was made clear after he vetoed a bill that would give parents the right to opt- out of sexually explicit reading assignments on behalf of their children. With regard to CRT, McAuliffe claimed that it had, in fact, never been taught in the Commonwealth of Virginia. Right-wing outlets countered, pointing out that the phrase “critical race theory” is outlined several times on the Virginia Department of Education’s website. Left-wing sources, however, have disputed this, holding that Republicans had not provided sufficient evidence to support their allegation that CRT is taught in public schools.

Youngkin, on the other hand, does support removing explicit material from schools, and has promised to ban CRT: “in the immortal words of Dr. Martin Luther King Jr., we’re called to judge one another based on the content of our character and not the color of our skin, and that’s why there’s no place for critical race theory in our school system, and why, on day one, I’m going to ban it.”

Another one of Virginians’ primary concerns was the economy, over which, like with education, the candidates had two separate views of what would be the best for their state.

McAuliffe believed in improving state workers’ conditions and wanted to address inequalities in Virginia’s economy. He also said that he would gradually increase the state minimum wage to $15 an hour. On the flip side, Youngkin said that he would cut taxes and decrease business regulations. Youngkin also claimed that a higher cost of living had led many to leave the state. He proposed a plan to address this issue that included lowering income taxes, eliminating Virginia’s grocery tax, suspending a recent gas tax for one year, and requiring voter approval before raising property taxes. 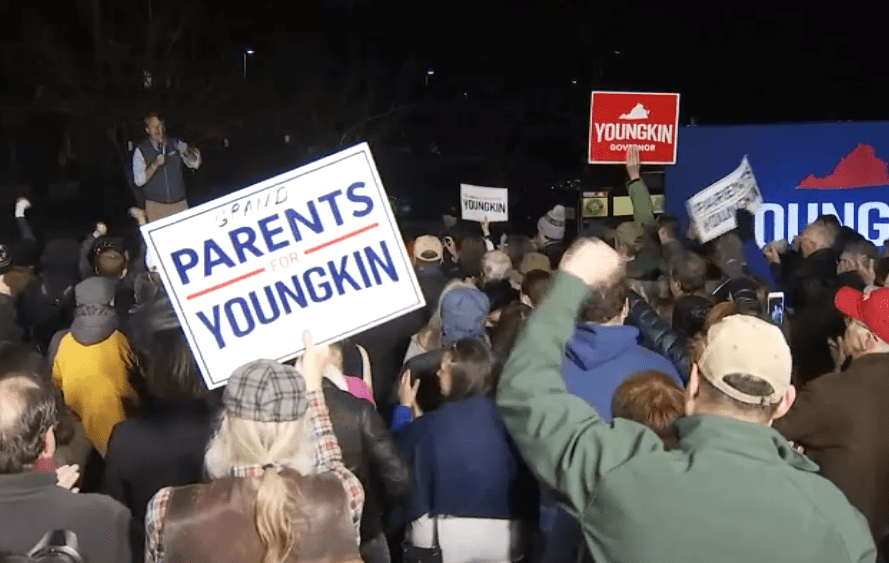 One of the main reasons Youngkin won the election was because he was able to win the suburban vote, the support that the GOP lost during Trump’s tenure. By distancing himself from Trump, and by pushing against CRT and other values  typically considered liberal, Youngkin was able to regain the suburban Republican vote. Youngkin’s agenda and push against liberally regarded values were not the only factors which played into his victory. According to Larry Sabato, the director of UVA’s Center for Politics, “[t]he key factor was, in fact, President Biden’s low ratings.” In an interview on CNBC’s “The News with Shepard Smith,” Sabato also claimed that internal fighting within the Democratic Party helped play into McAuliffe’s defeat:. “The Democrats would have been better off had they, in August or September, gotten together to make a compromise, but the fact that they can’t and they’re still fighting, still fighting, tells you all you need to know.”